Bibione and its history 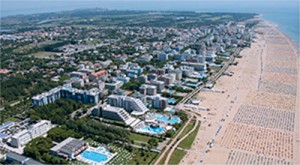 Bibione has both a very ancient and a very recent history. Being mostly a wild area, it was turned into a colony by the Romans in the first centuries a.D., who began with the land improvement works. After the arrival of barbaric populations, the area began losing in inhabitants, getting during the centuries under the control of the Republic of Venice, first, then under France and finally under the Austrian-Hungarian Empire. From the second half of the 19th century the land improvement was implemented and finished in the 1930s, having gained more than 10,000 hectares.
In the 1950s began the first activities to make the area interesting from a touristic point of view, building the first hotels and shops. In the last 60 years the town has reached its well-known popularity, becoming one of the most important touristic centers in the Alto Adriatico Region.

Relax at the thermal spa

Bibione´s thermal spas are one of the main attractions in the town. They are open all the year round and they offer tailored services for every guest´s needs. The thermal water is taken at a depth of 500 meters at a temperature reaching 52° C and its ideal both for whom needs specific treatments and for those who want to relax in the thermal pools or in the very modern spa equipped with sauna, hammam, polarium, solarium and an excellent restoration service for all the guests.

Special prices are available for guests at Stella Maris in every period of the year: ask the personnel or check our special offers on the website!

We offer for you

Do you want to spend your holidays in the nature, but you think the mountain area around Mount Grappa fits bettet to you? Then Don Chiavacci Center is the right place for you! Have a look at the house and his offers!